A quarterly and bilingual newsletter on the projects in which the joint entity participates in initiatives promoted by European Commission, such as Erasmus+, Horizon 2020, Interreg Sudoe and Poctefa, and AMIF. 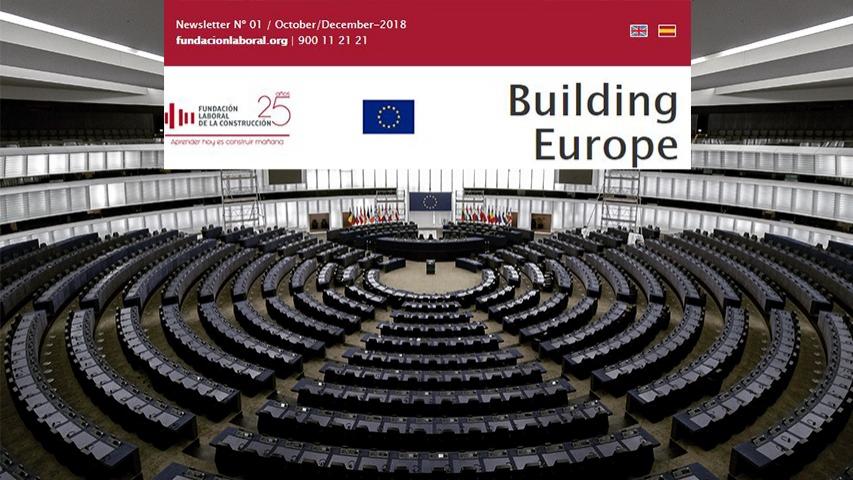 In the next few days, Fundación Laboral de la Construcción will launch the first issue of its new European information service: 'Building Europe'. This is a quarterly newsletter, which will gather news, in Spanish and English, on European projects led by the entity as well as in which it participates as a partner, reporting on its contribution to the interests of citizens and the construction industry in the European Union (EU).

Since Spain joined EU, following the signing of the Single European Act in 1986, together with Portugal, the country's engagement to the 'European family' has been resounding. Its collaboration in the reforms for the improvement of the Union, in the impulse of modernization and in the maintenance of peaceful spirit that inspired the birth of the EU are maintained in our days.

With the launch of 'Building Europe', Fundación Laboral de la Construcción wants to offer to companies and sector workers a new way of dissemination, as a strengthening step to the work it has been carrying out, since 2006, with its know-how in European initiatives.

The Foundation will offer information of the evolution, the good practices and the results of the innovative projects in which it collaborates, belonging to different programmes promoted by European Commission, such as Erasmus+, Horizon 2020, Interreg Sudoe, Interreg Poctefa and AMIF. It will also provide news about its role in the European context and in the international networks in which it takes part, such as CPD Network -Conference on Project Development-, Refernet -network created by the European Centre for the Development of Vocational Training (Cedefop); Reforme -European Network for Vocational Training in the construction sector in Europe-, and European Alliance for Apprenticeships (EAfA).

'Building Europe' newsletter will be released on Fridays in the penultimate week of each quarter (except the summer issue, which will be distributed in the second quarter). Its issues correspond to October/December, January/March, April/June and July/September. Anyone interested can subscribe through our Projects section.