It is expected that around 15 buildings and 200 homes in the Madrid municipality will improve their quality of life and comfort, and almost 140 students and workers will be trained in Energy Efficiency and Renewable Energy Systems in buildings, Thermal insulation in buildings, Installation of windows and Energy Efficiency in air conditioning. 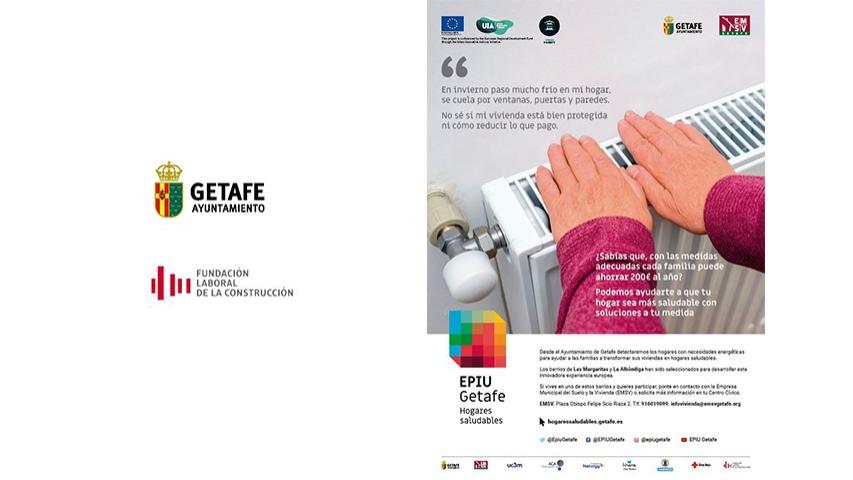 From 23rd November to 23rd December, EPIU Getafe Hogares Saludables project launched a local information campaign to inform the citizens of Getafe about the aim of this project: reduce poverty energy. The project is part of the Urban Innovative Actions (UIA) programme, led by Getafe City Council and Fundación Laboral de la Construcción participates as a technical partner in training and as a coordinator of the dissemination and communication of this initiative.

The aim of this local information campaign is to encourage the neighbours of Las Margaritas and La Alhóndiga - Getafe neighborhoods where the project will impact - to sign up to participate in this European initiative, whose aim is to identify and reduce energy poverty in the municipality in order to create healthy homes, specifically in two neighborhoods identified by the regional government as critical areas for urban regeneration and renewal.

The campaign started in the Getafe Municipal Newsletter, after which the Getafe City Council placed posters in the buildings of both neighbourhoods, in the Town Hall itself, and also in the Getafe Municipal Land and Housing Company, Getafe Red Cross and in the University Carlos III of Madrid (UC3M) campus of Las Margaritas, in order to reach interested users. In addition, an advertising campaign was launched in the main local publications, both in paper format and in digital and radio media, as well as on the project's social networks (@EpiuGetafe).

Although the campaign ended last December, anyone who lives in Las Margaritas or La Alhóndiga, and wants to make their home a healthy one, can contact the Municipal Land and Housing Company of Getafe (EMSV), by email (infovivienda@emsvgetafe.org) or by telephone (916019099) or through the project's website.

National Strategy as an urgent measure for energy transition

On April 5th, 2019, the Spanish Government approved the National Strategy against Energy Poverty 2019-2024, fulfilling the mandate established in Royal Decree Law 15/2018 of October 5th, about urgent measures for energy transition and consumer protection.

Between 3.5 and 8.1 million people - according to the indicator used - are in a situation of energy poverty in Spain. In order to evaluate energy poverty there are four official indicators used by the European Observatory against Energy Poverty (called EPOV):

The objectives to reduce energy poverty in the framework of the National Strategy against Energy Poverty (2019-2024) are, for each of the EPOV indicators: to reduce by at least 25% by 2025, aiming to go beyond and reach 50% of its current values.

From the 'macro' to the 'micro', not forgetting training

Thanks to the partnership led by Getafe City Council, with EPIU Getafe Hogares Saludables, the macro will become the micro; in other words, high-level decisions will be transferred to regional and local areas and transformed into actions that are closer to the citizens. The aim is to combat climate change and energy poverty through sustainable renovation measures, thanks to the intervention of professionals qualified in efficient construction.

Through the project, a data analysis system -based on big data- will be developed, called the Intelligent Energy Poverty Unit, which will monitor and collect information on energy consumption, income and other factors that measure household energy expenditure in the neighbourhoods of Las Margaritas and La Alhóndiga, in order to catalogue them according to their characteristics, taking into account the degree of vulnerability, on three scales: household, building and neighbourhood.

These cases, considered by the tool as 'energy vulnerable', will be analysed by an interdisciplinary team from Getafe Town Council, which will assess the implementation of tailor-made solutions and a compensatory commitment system. It is expected that around 15 buildings and 200 homes in the municipality of Getafe in Madrid will improve their quality of life and comfort.

On the part of Fundación Laboral, it is planned that between summer and autumn 2021, the joint entity will train 40 technical students, in the online mode, in the subject of Energy Efficiency in buildings and Renewable Energy Systems; and 99 active trade workers, in the mixed mode, in the following subjects: Thermal insulation in buildings, Installation of windows and Energy Efficiency in air conditioning.