The virtual reality application for learning Health and Safety road works, VRoad, will be ready this summer

The European project led by Fundación Laboral de la Construcción is working on the beta version of this tool, which will soon be launched in Spanish, English, French, Italian and Portuguese, together with a video guide that will help teachers, students and workers in the use of this technology. 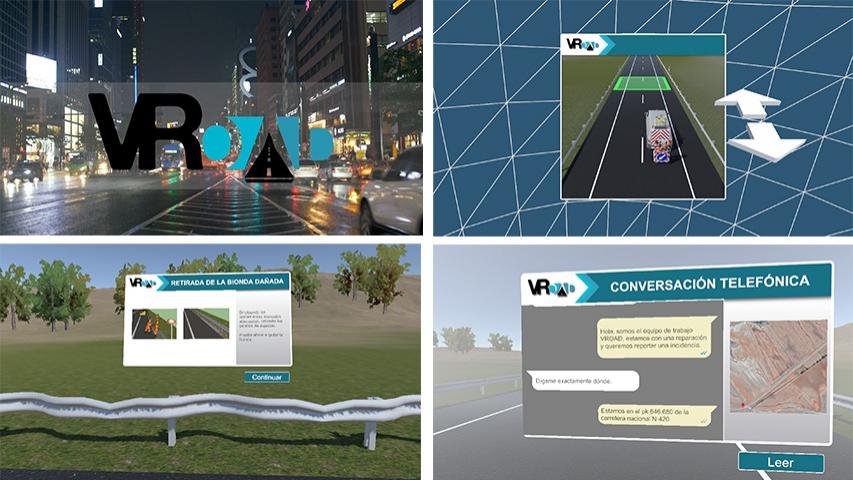 Coming soon will be the start the VRoad experience, the application of Virtual Reality (VR) for learning Health and Safety work in Road Maintenance and Operation, developed by a European partnership, led by Fundación Laboral de la Construcción, and made up of four other institutions from Spain, France, Italy and Portugal.

In 1999, the film Matrix made us want to become the protagonists of that mysterious city, alongside Neo (Keanu Reeves), Morpheus (Laurence Fishburne) or Trinity (Carrie-Anne Moss), and choose to take the blue or red pill. Now, VRoad will allow us to live a total immersion in real simulation practices for road works, from this summer. Specifically, in lane deviation, replacement of guardrail and vertical signal, and action in case of emergency.

Virtual Reality (VR) facilitates first-person learning and greater knowledge acquisition, thanks to the simulation, interaction and perception experienced by users. It is a key element and fundamental support for learning, especially in areas where the visualisation of the processes studied is particularly difficult, as well as putting them into real practice, like the case of road works, due to the dangers for trainers and trainees.

The full immersion of this technology allows us to obtain a sense of 3D space that is not achieved with any other system. Furthermore, it is an intuitive technology in terms of its use and facilitates the explanation of complex or abstract concepts.

Unlike other "traditional" teaching systems, VR motivates the learner by exploring the virtual world, involving them with all their senses in the learning process, and the student becomes part of the real scenes simulated by the computer system.

This sensory immersion in a digital world, created artificially, can be perceived through virtual reality glasses and accessories such as audio helmets, gloves, controls, etc.

In this way, VR helps to generate knowledge, skills and abilities, as well as to develop attitudes and improve skills, through real first-person practice, which facilitates real practice.

The advantages of learning with the VRoad application are: real safety for trainers and trainees, the costs of on-site practice and an active user experience that facilitates concentration, experimentation and understanding of difficulties of this type of work. Therefore, VRoad is presented as a great opportunity for the user to consolidate his or her knowledge before moving on to real practice.

The VRoad project has been developed with Unity3D Professional under MS Windows. Unity is the development platform for interactive 3D environments chosen by most professionals in the 4.0 industry and is compatible with the .Net programming language. Under this platform, executable simulations for Windows environments will be developed, free of copyright.

To run these experimental simulations correctly, the following equipment and features will be required: computer or laptop, software required for installation, control knobs, headphones (optional) and, of course, HMD glasses (virtual reality displays known as HDM, for its meaning in English -Head-Mounted Display-) in order to be able to perform the dive simulations for a single user.

The project partners are in process of designing a video guide that will explain in detail all the requirements and technical recommendations of VRoad application. In addition to explanations to start the experience step by step and about the different parts of the application.

The first references to simulation technology are from the late 1950s and early 1960s. Morton Heilig developed the Sensorama multi-sensorial simulator, which combined 3D images with sound, wind and smells to create an illusion of reality; and, Phillco Corporation developed the Headsigth project, the precedent of the helmet with built-in screen used today for VR (this project was applied for military training).

However, it was Ivan Sutherland who, in 1965, first described the concept of virtual reality, and a couple of years later, together with his team from the Massachusetts Institute of Technology (MIT), developed a VR device called the Ultimate Display and renamed it "the sword of Damocles", since it consisted of a "helmet" attached to a computer, but the sizes at the time were so large and heavy that the helmet was hanging from the ceiling. It was the first Head Mounted Display (HMD).

In 1982, another science fiction film, Tron, was responsible for bringing the VR concept to the general public and an aesthetic that has marked the way VR devices are still developed today.

In the following years, other accessories would follow, such as sensor gloves (Data Glove and SubRoc-3D, 1982), goggles (Sega VR, 1993) and helmet and device upgrades.

* Check out the beta version of the VRoad application.